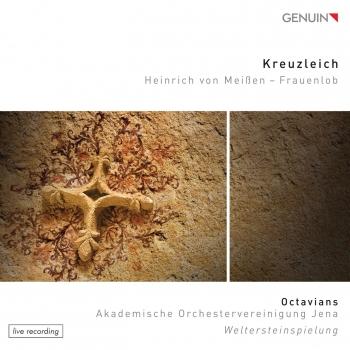 The Octavians [ˌokˈteɪvɪæns]
rank among the most well-known vocal ensembles in Germany. They are the award winners of a number of a cappella competitions and excel with their homogeneous sound and musical versatility while successfully balancing the demands of a vocal repertoire containing both sacred and humoristic music.
Their three countertenors lend the group a distinctive timbre and thus allow them to cover the vocal spectrum from the highest soprano to the lowest bass. The Octavians’ repertoire of sacred and secular a cappella works ranges from the beginning of polyphony during the eighth century to contemporary jazz and pop.
In 2010, the Octavians won 1st prize at the national competition “Jugend musiziert”. One year later, the Octavians were awarded a Silver Diploma at the a cappella festival “Vokal total” in Graz against international competition. This was followed by third place in the “Klassisches Ensemble” (classical ensemble) category at the 2014 Deutscher Chorwettbewerb (German Choral Competition). In 2017, the Octavians won the prestigious international A CAPPELLA Competition and also received the coveted audience award. As award-winners, they were subsequently invited to give a concert at the Leipzig A CAPPELLA Festival and to perform as part of the Bachfest Leipzig.
Concerts and radio performances have introduced the Octavians to a wide audience in Germany. International tours have taken the singers to Tunisia, the Chinese metropolitan cities of Guangzhou and Hong Kong as well as throughout Europe.
Die Akademische Orchestervereinigung Jena
The Friedrich Schiller University Jena is home to the Akademische Orchestervereinigung Jena, in which currently over 70 students, employees of the university and music lovers as well as professional musicians make music together. Throughout its 60 years of existence, the orchestra has given numerous concerts of works ranging from the Baroque Period to world premieres of contemporary compositions.
Sebastian Krahnert
artistic director of the Akademische Orchestervereinigung Jena since 1991, studied orchestral conducting and piano in Dresden and Weimar. Engagements as a conductor, pianist and an accompanist have led him to work at the Theater Erfurt, in Weimar as director of the symphony orchestra of the Musikgymnasium Schloss Belvedere as well as with the Orchester der Humboldt Universität Berlin “cappella academica”.
He has given concerts at the Dresdner Musikfestspiele, the Berlin Schauspielhaus, the Staatsoper Unter den Linden, the Internationales Musikseminar Weimar and the Schubertiade Weimar, among others.
Andreas Kuch
is a music teacher, composer and beat boxer. He writes arrangements and compositions for choirs and vocal ensembles and is active as a producer for theater projects in and around Erfurt. Andreas Kuch teaches piano improvisation and song accompaniment, is an accompanist for choral workshops and works in improvisational theater. Weimar, among others.