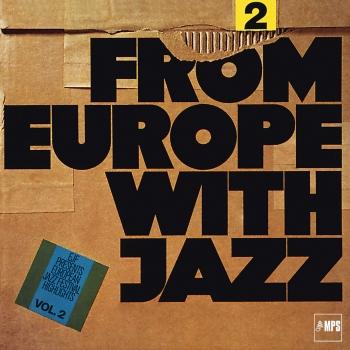 From Europe with Jazz 2

Karin Krog
is perhaps Norway's leading jazz singer and certainly its most idiomatic. She is a unique song artist with a great international reputation possessing her own recognizable style and voice. Her constant creative approach towards contemporary jazz has never been bound by tradition, even though her music bears a deep respect for its forms. Karin is equally at home with jazz standards, blues or electronic experimental techniques.
In addition, she has been active in improving the working conditions for musicians and contributing towards a vital jazz milieu. In 1994 she celebrated 30 years since her first released LP as a solo artist.
Karin Krog was born in Oslo, Norway, on the 15th of May, 1937, and started to sing during her teenage years together with various local musicians. She attracted attention during jam sessions at the Penguin club in Oslo, and in 1955 was hired by the pianist Kjell Karlsen to sing in his sextet, followed by her radio debut the next year. In 1957 she sang at the Humlen Restaurant in Oslo in company with some of the best Norwegian jazz musicians of that time, among others tenor saxophonist Mikkel Flagstad and pianist Einar Iversen, participating in several jazz concerts towards the end of the 1950's. She featured in radio broadcasts with several combos and in 1959 was voted first place for female jazz singer in the annual poll of the Norwegian weekly paper "Verdensrevyen" (World's Revue).
Krog was a natural choice on the bill when the first Molde International Jazz Festival was formed, appearing with the Kjell Karlsen quartet. From 1962 she fronted her own groups. In addition, she sang with trombonist Frode Thingnæs' Quintet, pianist Egil Kapstad's trio (1962-64), and studied from 1962 to 1969 with the Norwegian-American singer Anne Brown (the first Bess in Gershwin's "Porgy and Bess"). Karin made her recording debut on the LP "Metropol Jazz" in 1963, and recorded a pair of 45-rpm singles. She made her own solo album "By Myself" in 1964, and performed the same year at festivals in Antibes, France, at Gyllene Circeln in Stockholm and at Kongsberg Jazz Festival in Norway. In 1965 Karin received the Buddy award, the most coveted mark of honour from the Norwegian Jazz Federation. That same year pop music took over the charts and most of the Norwegian jazz clubs began experiencing difficulties, and many folded. However, Krog and her colleagues took direct action and formed the Norwegian Jazz Forum, where she became its first chairman (1965-66). The Forum was instrumental in getting jazz out of the night-clubs and into concert settings, thus securing a place for live jazz performance and providing a platform for jazz musicians to perform and to receive inspiration.
She continued with her own quartets and quintets, singing with groups led by Egil Kapstad, and recorded two singles with the rhythm & blues band "Public Enemies" (1966), before making her second LP "Jazz Moments" (which included a young Jan Garbarek).
Her international career began to take off with visits to Warsaw and Prague in 1966. In 1967 she performed in the USA with Don Ellis and Clare Fischer, appeared in Brussels, and received the first place nomination for "Artist Deserving of Wider Recognition" in Down Beat critic's poll. During the following year Karin appeared at the Montreaux festival and continued on to tour Europe in 1969 and Japan in 1970 with the Down Beat Poll Winners. Back in Norway she began studying with the singer Ivo Knecevic (1969-72), and was awarded the Norwegian Government's travel and study award in 1970, at that time an unusual honour for a jazz musician.
In 1970 and '71 she visited America, was granted a Norwegian government's work scholarship, led the European Workshop at Kongsberg Jazz Festival in 1972, and received a Norwegian "Grammy" during 1974. Also, during 1973-74, Karin took time off to study television production. To top all this off, the European Jazz Federation in 1975 elected her "Female Singer of the Year".
During most of the 1970's she fronted bands with Norwegian musicians, but from the mid-70's she often worked in small combinations, duos and trios, with prominent foreign musicians like John Surman, Bengt Hallberg, Red Mitchell, Nils Lindberg, Dexter Gordon, Achie Shepp, and Warne Marsh. In the 70's, she also co-operated on a concert programme with Richard Rodney Bennet, called "Synthesis" touring both Norway and Great Britain. In the mid-80's she appeared at several festivals with the trio Krog/Surman/Hallberg. Collaborating further with John Surman, she has continued to develop her electronic vocal techniques. Visit: http://www.karinkrog.no