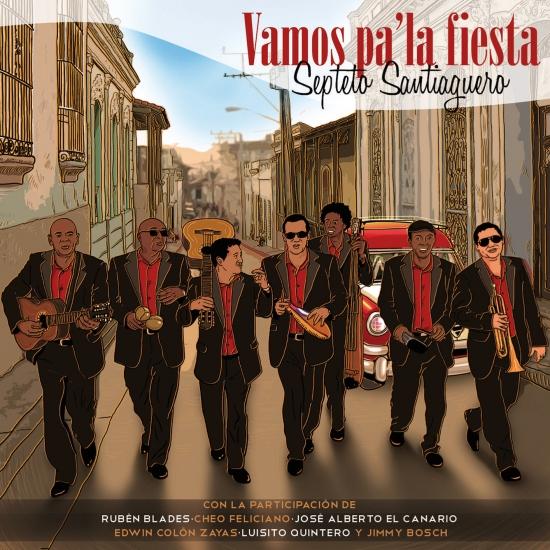 Septeto Santiaguero release their latest album. VAMOS PA 'LA FIESTA is the title of this new album, the seventh of septeto career which started in 1995. On the album there are 14 tracks and a bonus track, a route through different genres of root Cuban music as Son, Guaracha, Bolero, Traditional Trova, Danzón, Changüí and Pilón. Also Son is combined with Cumbia at the end of the album. A few days ago in their arrival in Spain in the European tour, they presented us songs of the new album and the daily paper El Pais said of them: “All songs can rabidly be danced” and “a well blend into its Caribbean spirit that combines modernity and respect to the essences”.
The album has deluxe collaborations such as: Rubén Blades, Cheo Feliciano, José Alberto El Canario, Luisito Quintero, Jimmy Bosch and Edwin Colón Zayas.
With Vamos pa’ la fiesta Septeto Santiaguero wants to thank the historical counterparts of the salsa movement 'for everything they have done in favor of preservation of Son and Bolero' says director and as producer of the album Fernando Dewar.
This is the first occasion on which several of these historical figures of the salsa movement come together to participate in a production with Cuban musicians on the island.
Rubén Blades plays two classics, Lágrimas Negras by Miguel Matamoros and Contéstame by Arsenio Rodriguez. Blades appears also with the unmistakable voice and his alter ego 'Medoro Madera', a character created by Rubén Blades to honor the Cuban Son artists, appearing for frst time in an album different from the Rubén Blades ones, that is Vamos Pa’ la Fiesta.
Cheo Feliciano sings “Un poquito de tu amor” (A little bit of your love) a song with Son and Bolero, the authorship of 'manzanillero' Julio Gutierrez, who lived a long time in Puerto Rico.
El Canario plays a popular song of Los Compadres in the Dominican Republic, “Amor Silvestre” (Wild Love), by Lorenzo Hierrezuelo, being this version an explicit homage to Reynaldo Hierrezuelo, Rey Caney.
Jimmy Bosch plays the trombone in the “La Reina Isabel” from the great Electo Rosell Chepín, a Danzón whit an implicit tribute to Cachao. Edwin Colón Zayas plays the “cuatro boricua” in “Que le den candela” a bow to the contributions of Van Van to the contemporary Son of Septeto Santiaguero. Luisito Quintero plays the bongo in the changüí song “Yo Si tumbo la mata”.
'We wanted to insert all the guests into the Casa de la Trova (Santiago de Cuba) atmosphere, that who listen to the album imagine them there, singing and playing with us' Fernando Dewar said, who added it was always clear that 'These major figures of Latin music would play songs of the masters to those who have admired all their life, as we also revere all every day; always wanted that the album was based on shared passion”.
Among the new published songs appears the signature of prominent Cubans living composers as Rodulfo Vaillant, Alain Pérez and Osnel Odit.
The album was recorded between November 2011 and May 2012 at various studios in Santiago de Cuba, New York, New Jersey, Puerto Rico and Barcelona. The mastering was done in the 44.1 Studios of Aiguaviva, Girona.
Like the previous album 'Oye mi son Santiaguero' which was awarded in the Cubadisco 2011 and nominated in the 2011 Latin Grammy, Picap edits Vamos Pa' la Fiesta. 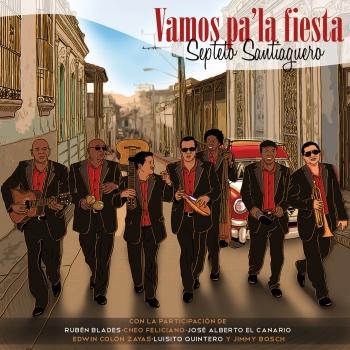 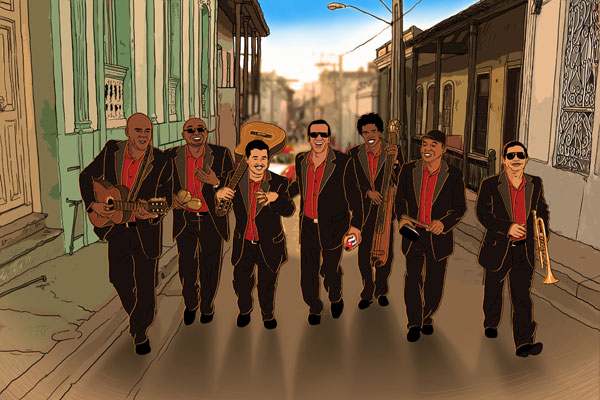 Septeto Santiaguero
was founded on February 2, 1995, a direct consequence of Melodías de Ayer, old formation that since 1962 was deeply tied to tradition of Santiago de Cuba and Casa de la Trova. Fernando Dewar, last director of Melodías de Ayer, decided with many of its members to look at the tradition from the contemporary with the septet format. Santiago de Cuba is the birthplace of Cuban son, all the traditional Cuban music, and in those places Septeto Santiaguero has been a success since its founding. The style is captivating, mainly for the powerful sound, accurate and overwhelming rythm and the heterogeneous projection that allows to satisfy diverse public and different compositions interests.
Septeto Santiaguero live is astonishing, in every performance they show their quality, based on respect for universal pleasures. They have the merit to create an extremely warm empathy with the public at each and every one of the performances.
Since the year of its founding Septeto Santiaguero began fighting for the international stages; Germany, Algeria, Austria, Belgium, Croatia, Slovenia, Spain, France, Holland, Hungary, England, Italy, Mexico, Portugal, Finland, San Marino and Switzerland... among many others.
In Cuba they have been performing at major locations: Casa de la Música Habana, Casa de la Música in Miramar, Café Cantante of the National Theatre, Salón Rosado in la Tropical, Teatro Heredia, Santiago de Cuba Carnaval, in the "World Longer Son” (Guinness Record 1997, Salón Rosado in La Tropical), all editions of the Son Festival 'Matamoroson'; National Meeting Septet (1998, 1999, 2002 and 2009), Cubadisco (98, 99 and 2002), Festival of Country Music "Eduardo Saborit" (1998) and in all Festivals of Trova Pepe Sánchez since its founding to the present. Especially in the national septet meetings Septeto Santiaguero has taken flight, being the great attraction of each one in which they participated. Santiago de Cuba is the main source of this type of format and in that city Septeto Santiaguero is the patron of all Septets. At the end of 2009 was one of the bands chosen to participate in the Cuban TV program for the end of the year "No quiero llanto”.
In Santiago de Cuba it’s easy to find them, they usually play in Casa de la Trova and in Casa de la Música.