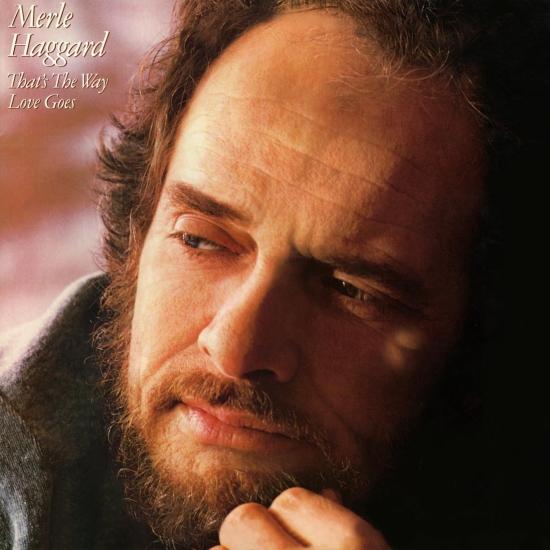 Here's one of the great, lost Haggard albums, originally released in 1983 and telling his side of the story of his then-recent divorce from Leona Williams. The tone is bleak, funereal, without a single uptempo stomp to break up the succession of one beautiful, heartbreaking ballad after another. Highlights are 'What Am I Gonna Do (With the Rest of My Life),' which suggests that only time can heal these wounds and time can't move quickly enough; the deeply ambivalent 'Love Will Find You'; and the title track, one of Lefty Frizzell's most agonizing and resigned deathbed compositions. Haggard ends his remake with a weary, defeated moan that sums up the whole album and all his contradictory feelings of pain, pride, defiance, pessimism, futility, and disgust. The crack band is more Western than country, effortlessly supporting the mood of the songs. But there's no drawing attention away from the star, whose rich, stunning performances make the case for him as the stylist of his era.
Merle Haggard, vocals, guitar
Roy Nichols, guitar
Reggie Young, guitar
Greg Galbraith, guitar
Dave Kirby, guitar
Glenn Martin, guitar
Red Lane, guitar
Norm Hamlet, steel guitar
Dennis Hromek, bass
Mike Leach, bass
Gene Chrisman, drums
Kenny Malone, drums
Biff Adams, drums
Tiny Moore, fiddle, mandolin
Jimmy Balken, fiddle
Bobby Wood, keyboards
Mark Yeary, keyboards
Terry McMillan, harmonica
Don Markham, horns
Recorded May 1983 at Woodland Sound Studio and Eleven Sound Studio, Nashville, TN
Engineered by Rick McCollister, Ron Reynolds
Produced by Merle Haggard, Ray Baker
Digitally remastered 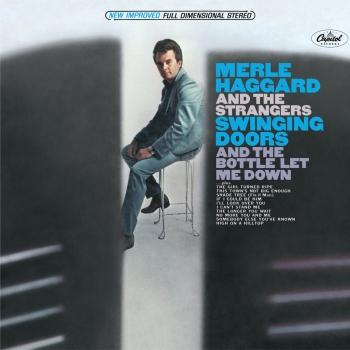 Swinging Doors And The Bottle Let Me Down 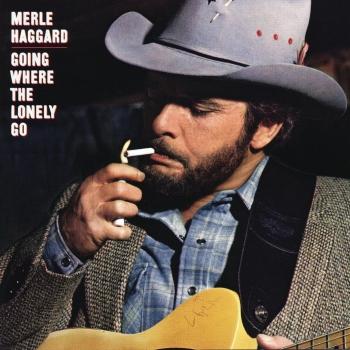 Going Where The Lonely Go 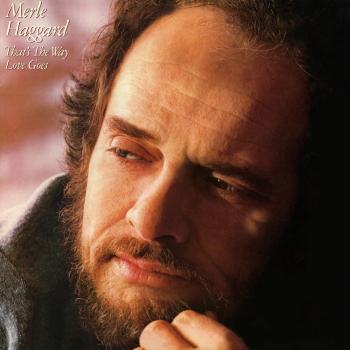 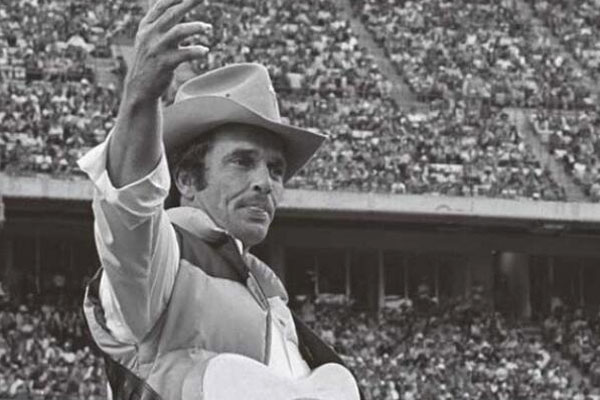 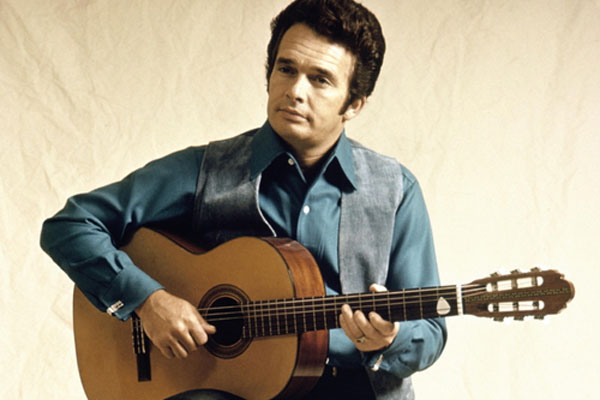 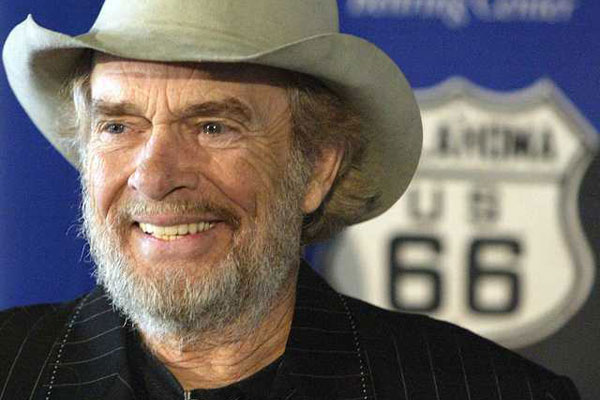 Merle Haggard
Though for the last decade his new recordings have received almost no airplay—in the innocently cruel Nashville taxonomy, he is classified as a living legend—Merle Ronald Haggard remains, with the arguable exception of Hank Williams, the single most influential singer-songwriter in country music history.
Haggard is certainly one of the genre’s most versatile artists. His repertory ranges wide: aching ballads (“Today I Started Loving You Again,” “Silver Wings”); sly, frisky narratives (“Old Man from the Mountain,” “It’s Been a Great Afternoon”); semi-autobiographical reflections (“Mama Tried,” “Hungry Eyes”), political commentaries (“Under the Bridge,” “Rainbow Stew”), proletarian homages (“Workin’ Man Blues,” “White Line Fever”), as well as drinking songs that are jukebox, cover-band, and closing-time standards (“Swinging Doors,” “The Bottle Let Me Down,” “I Think I’ll Just Sit Here and Drink”).
His acolytes are legion and include many of country music’s brightest and lesser lights, as well as thousands of nightclub musicians. As fiddler Jimmy Belken, a longtime member of the Strangers, Haggard’s exemplary touring band, once told The New Yorker, “If someone out there workin’ music doesn’t bow deep to Merle, don’t trust him about much anything else.”
Haggard was born poor, though not desperately so, in Depression-era Bakersfield to Jim and Flossie Haggard, migrants from Oklahoma. Jim, a railroad carpenter, died of a stroke in 1946, forcing Flossie to find work as a bookkeeper.
Flossie was a fundamentalist Christian and a stern, somewhat overprotective mother. Not surprisingly, Merle grew quickly from rambunctious to rake-hell. By his twenty-first birthday he had run away regularly from home, been placed in two separate reform schools (from which he in turn escaped a half-dozen times), worked as a laborer, played guitar and sung informally, begun a family, and performed sporadically at southern California clubs and, for three weeks, on the Smilin’ Jack Tyree Radio Show in Springfield, Missouri. He also spent time in local jails for theft and bad checks.
His woebegone criminal career culminated in 1957 when, drunk and confused, he was caught burglarizing a Bakersfield roadhouse. After an attempted escape from county jail, he was sent to San Quentin. There, in a final burst of antisocial activity, he got drunk on prison home brew, landing himself briefly in solitary confinement. He was paroled in 1960 and, after a fitful series of odd jobs, got a regular gig playing bass for Wynn Stewart in Las Vegas.
Another Bakersfield mainstay, Fuzzy Owen, signed Haggard to his tiny Tally Records in 1962. After recording five singles there—the first release, “Skid Row” b/w “Singin’ My Heart Out,” sold few copies; the fourth, “(My Friends Are Gonna Be) Strangers,” entered Billboard’s Top Ten (1965)—Haggard signed with Capitol. He moved to MCA in 1976, to Epic in 1981, and in 1990 to Curb.
He released his first album, Strangers, in 1965. Roughly seventy feature albums have followed. Counting repackagings, reissues, compilations, promotional and movie-soundtrack albums, as well as albums in which Haggard has participated—with the likes of Willie Nelson, Porter Wagoner, Johnny Paycheck, Bob Wills, Dean Martin, Ray Charles, and Clint Eastwood—the number of albums is likely more in the vicinity of the 150 mark.
Haggard has recorded more than 600 songs, about 250 of them his own compositions. (He often shares writing credits as gestures of financial and personal largess.) He has had thirty-eight #1 songs, and his “Today I Started Loving You Again” (Capitol, 1968) has been recorded by nearly 400 other artists.
In addition, Haggard is an accomplished instrumentalist, playing a commendable fiddle and a to-be-reckoned-with lead guitar. He and the Strangers played for Richard Nixon at the White House in 1973, at a barbecue on the Reagan ranch in 1982, at Washington’s Kennedy Center, and 60,000 miles from earth—courtesy of astronaut Charles Duke, who brought a tape aboard Apollo 16 in 1972. Haggard has won numerous CMA and ACM Awards including both organizations’ 1970 Entertainer of the Year awards, been nominated for scores of others, was elected to the Songwriters’ Hall of Fame in 1977, and won Country Music Hall of Fame membership in 1994. In 1984 he won a Grammy in the Best Country Vocal Performance, Male category for “That’s the Way Love Goes.”