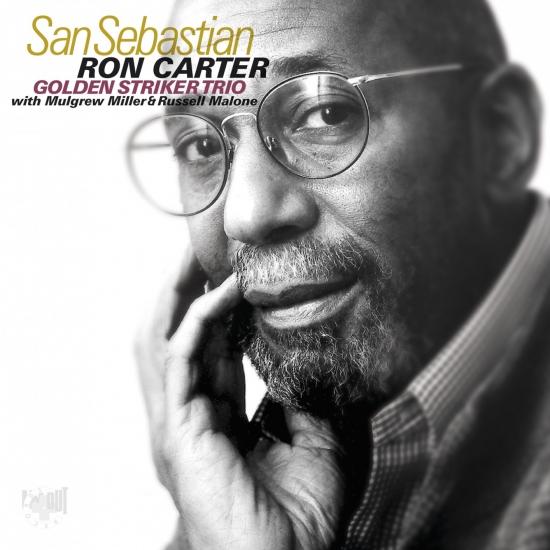 Ron Carter has just been appointed into the Hall of Fame by the American Don Beat Magazine. The trio is shown in front of a picturesque and historic scenery with his long term Trio members Mulgrew Miller (piano) & Russell Malone (guitar) in the best playing mood. The Gentleman und true King of the contrabass present here to his 70 Birthday a Masterpice of timeless beauty.
The release of a new album by the universally acclaimed master of the double bass, Ron Carter, is always a cause for celebration – and this new Golden Striker CD and DVD will be warmly welcomed by all discerning jazz lovers. In a foreword to Dan Quellette’s 2008 biography – Ron Carter – Finding The Right Notes – published b ArtistShare, Nat Hentoff wrote: “Not only is he an internationally acknowledged master bassist, composer and leader, but Ron Carter is also deeply rooted in the history of the music and, in my experience, an especially lucid educator who brings newcomers and long- time jazz a cionados inside the music – and the musicians whose life stories are the music.”
Ronald Levin Carter, from Ferndale, Michigan, Mulgrew Miller, from Greenwood, Mississppi and Russell Malone, from Albany, Georgia, are all acknowledged virtuosi of their respective instruments and, on this album, they manifest a magical rapport.
Mulgrew Miller is a powerful and resourceful pianist who has played with a host of jazz greats, including Mercer Ellington, Betty Carter, Woody Shaw, Art Blakey, Johnny Grif n, Branford Marsalis, Terence Blanchard and Freddie Hubbard.
Russell Malone is a self-taught swing and bop guitarist who learned his technique from listening to recordings by Charlie Christian, George Benson and Wes Montgomery. He began working with organist Jimmy Smith in 1988 and subsequent musical associates have included Benny Green, Diana Krall, Harry Connick Jr., Hank Jones and Bobby Hutcherson.
Before the start of the San Sebastian concert, Ron Carter was presented with the Donostiako Jazzaldia Award. This award is presented annually by the festival to an “outstanding person in the eld of jazz.”
The San Sebastian concert was a sell-out, attracting an audience of more than 2,000 people and rave reviews from the critics. And, as Mike Hennessey observes in the booklet note, it produced an album to treasure.
„The German In and Out label captured the sold-out performance of the Golden Striker Trio in San Sebastian on the last evening of their 2012 European tour. Bassist Ron Carter re-assembled with pianist Mulgrew Miller and guitarist Russell Malone, who had initially played together on the 2003 studio album The Golden Striker on Blue Note. The trio's moniker is borrowed from the John Lewis composition from 1960, a fitting name as the slightly introspective brand of chamber jazz is similar to the Modern Jazz Quartet but not quite as restrained. Alongside the John Lewis tune, the five tracks feature two Ron Carter compositions, "Candle Light" and "Saudade," the standard "My Funny Valentine," and Luiz Bonfá's "Samba de Orpheus."
„Few bassists were as ubiquitous as Ron Carter, from the experimental post/free bop of trumpeter Miles Davis s 1960s quintet to straight-ahead swing with guitarist Kenny Burrell and the greater extremes of saxophonist Archie Shepp.“ (AllAboutJazz)
„There really is no doubt that Ron Carter is the preeminent jazz bassist of the last several decades.“ (Jazz Chicago)
„A refreshing not stuffy jazz-history survey ... typically impeccable time, tone that s woody and resonant, and adroit note choices.“ (JazzTimes)
Ron Carter, bass
Mulgrew Miller, piano
Russel Malone, guitar