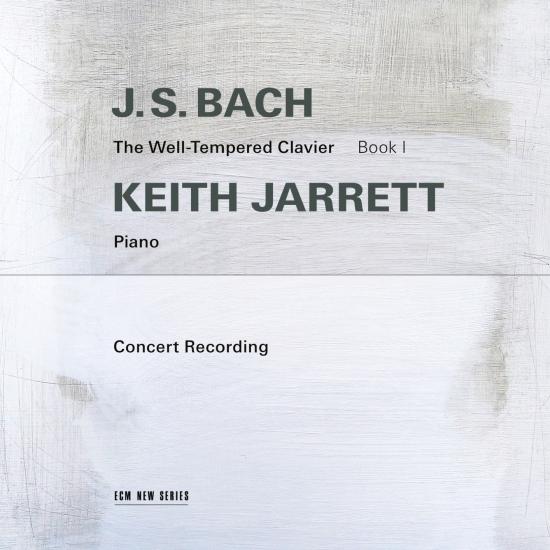 “These are performances in which tempos, phrasing, articulation and the execution of ornaments are convincing,” wrote Gramophone of Jarrett’s first recorded account of The Well-Tempered Clavier. “Both instrument and performer serve as unobtrusive media through which the music emerges without enhancement.” In this live recording from Troy, New York, made in March 1987, just one month after his studio recording of the work, Keith Jarrett addresses the challenges of Bach’s great set of preludes and fugues once more. Part of the goal is transparency, to bring the listener closer to the composer. As Jarrett explained at the time: “The very direction of the lines, the moving lines of notes, are inherently expressive…When I play Bach, I hear almost the process of thought. Any colouration has nothing to do with this process.“
In February 1987, Keith Jarrett recorded, on piano, the first book of The Well-Tempered Clavier by Johann Sebastian Bach. It was the first in a series of lauded Bach discs that Jarrett would make for ECM. On March 7, 1987, prior to the release of the studio set, he performed the complete WTC Book I for an audience in upstate New York at the Troy Savings Bank Music Hall, a venue renowned for its beautiful acoustics. With this release, ECM is presenting an archival live recording of this concert for the first time. When his studio album of the WTC Book I was released, Jarrett’s manner in these iconic preludes and fugues surprised many listeners with its poetic restraint, given his renown as a jazz improvisor. But the pianist was deeply attuned to what he called “the process of thought” in Bach; by not imposing his personality unduly on the music, Jarrett allowed the score to shine via the natural lyricism of the contrapuntal melodic lines, the dance-like pulse of the rhythmic flow. These qualities are strikingly apparent in the live recording, with its added electricity of a concert performance.
Jarrett has explored the classical repertoire for ECM New Series with a depth and breadth that few jazz artists have ever attempted. He has surveyed much other solo keyboard music by Bach, including the WTC Book II, Goldberg Variations and French Suites, all on harpsichord. He also recorded, on harpsichord, Bach chamber pieces with violist Kim Kashkashian and, on piano, Bach sonatas with violinist Michelle Makarski. In league with violinist Gidon Kremer, Jarrett recorded the reference version of Arvo Pärt’s Fratres, which appeared on the disc Tabula Rasa, the very first ECM New Series release, in 1984. The pianist also recorded two volumes of concertos by Mozart, as well as concertos by Bela Bartók and Samuel Barber. On solo piano, Jarrett has ranged, to great acclaim, from Handel’s keyboard suites to Shostakovich’s 24 Preludes & Fugues, Op. 87. Reviewing Jarrett’s 1992 Shostakovich set, The New York Times declared: “Even in our multicultural, multistylistic age, it is still extremely difficult to cross over from one field to another. Mr. Jarrett, having long since established himself in jazz, can now be called a classical pianist of the first rank.”
J.S. Bach composed The Well-Tempered Clavier (BWV 846-893) as a collection of two books of preludes and fugues in all 24 major and minor keys, the music as sublimely expressive as it is acutely instructive. He compiled Book I in 1722, at age 37, while working in Köthen, Germany (with Book II completed two decades later, in Leipzig); the WTC wasn’t published until 1801, nearly a half-century after Bach’s death. Down through the ages, this music has been a signal influence on composers from Mozart, Beethoven and Chopin to Brahms, Shostakovich and beyond.
Gramophone magazine, reviewing Jarrett’s studio recording of the WTC Book I, said: “These are performances in which tempos, phrasing, articulation and the execution of ornaments are convincing. Both instrument and performer serve as unobtrusive media through which the music emerges without enhancement.”
Discussing Bach in the booklet essay for that studio recording, Jarrett said this about his subtle approach to the composer’s music: “This music does not need my assistance. The melodic lines themselves are expressive to me… The very direction of the lines, the moving lines of notes are inherently expressive.” In a 1994 interview with Fanfare magazine, Jarrett linked his playing of Bach with his background as an improviser in one key aspect: “When you’re an improviser, there’s a certain shimmer to the motion of things. It’s a dance.”
Keith Jarrett, piano