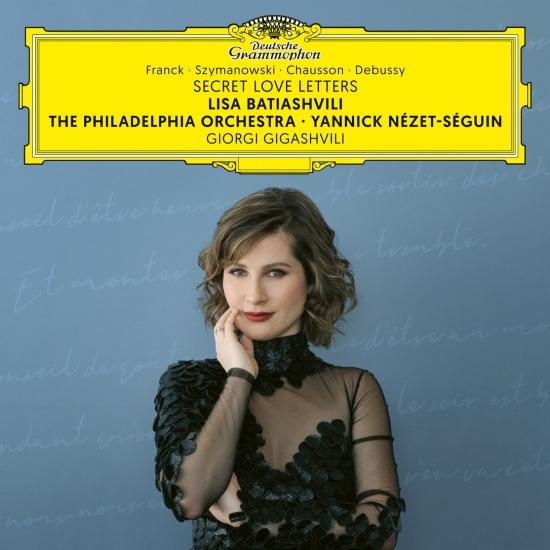 Lisa Batiashvili's new album Secret Love Letters presents music inspired by late Romantic literature and great virtuosos of the past: Karol Szymanowski's First Violin Concerto, Ernest Chausson's Poème, César Franck's Sonata in A major for violin and piano and Claude Debussy's Beau soir.
"What would human life be," asks Lisa Batiashvili, "without this abundance of feelings that we think we can't share with anyone?" Her new album celebrates the fine art of concealment, the lonely passion, but also the moment when it can no longer be restrained. On Secret Love Letters, the violinist explores some highly romantic music. She is accompanied by the Philadelphia Orchestra - the first time she has recorded an album with an American ensemble - and its principal conductor Yannick Nézet-Séguin, with whom she has already performed several times, as well as by the young Georgian pianist Giorgi Gigashvili. They play music that tells of forbidden love, but also commemorates past love in old age.
"There are so many hidden messages in music, things you can't put into words," says Lisa Batiashvili. "The pieces by Chausson, Debussy, Franck and Szymanowski that I have chosen for this album have something very obvious in common. It is the message of love, which finds expression in music in so many different facets and colours. And so often this message is secret and very intimate." Nézet-Séguin agrees with the violinist: "Music begins where words end, that's one of my favourite quotes. The special thing about music is that it allows us to say things that sometimes we don't even admit to ourselves."
Lisa Batiashvili, violin
Giorgi Gigashvili, piano
Philadelphia Orchestra
Yannick Nézet-Séguin, conductor 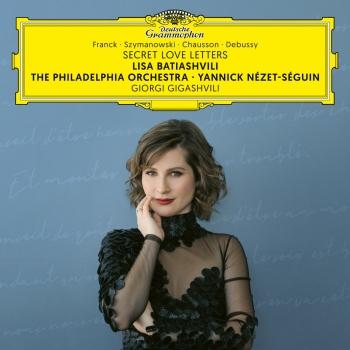 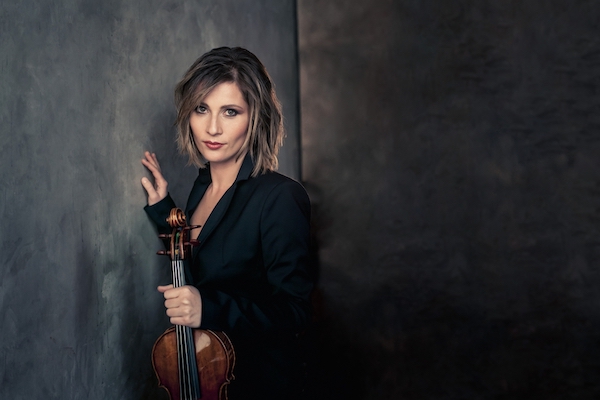 Lisa Batiashvili
Recording exclusively for Deutsche Grammophon, Batiashvili’s latest album City Lights was released in June 2020. The project marks a musical journey that takes listeners around the world to eleven cities with an autobiographical connection with music ranging from Bach to Morricone, and Dvořák to Charlie Chaplin. At the internationally renowned Concert de Paris on Bastille Day in Paris in 2020 she performed the title track City Memories which was broadcast across the world.
Her previous recording – Visions of Prokofiev (Chamber Orchestra of Europe/Yannick Nezet-Seguin) – won an Opus Klassik Award and was shortlisted for the 2018 Gramophone Awards. Earlier recordings include the concertos of Tchaikovsky and Sibelius (Staatskapelle Berlin/Daniel Barenboim), Brahms (Staatskapelle Dresden/Christian Thielemann), and Shostakovich No.1 (Symphonieorchester des Bayerischen Rundfunks/Esa-Pekka Salonen).
Bastiashvili has had DVD releases of live performances with the Berliner Philharmoniker/Yannick Nézet-Séguin (Bartók’s Violin Concerto No.1) and with Gautier Capuçon, Sächsische Staatskapelle Dresden and Christian Thielemann (Brahm’s Concerto for Violin and Cello).
She has won a number of awards: the MIDEM Classical Award, the Choc de l’année, the Accademia Musicale Chigiana International Prize, the Schleswig-Holstein Music Festival’s Leonard Bernstein Award and the Beethoven-Ring. Batiashvili was named Musical America’s Instrumentalist of the Year in 2015, was nominated as Gramophone’s Artist of the Year in 2017, and in 2018 was awarded an Honorary Doctorate from the Sibelius Academy (University of Arts, Helsinki).
Lisa lives in Munich and plays a Joseph Guarneri “del Gesu” from 1739, generously loaned by a private collector.
“Batiashvili’s fearless playing is so tonally rich and technically immaculate.” (The Guardian)
Lisa Batiashvili, the Georgian-born German violinist, is praised by audiences and fellow musicians for her virtuosity. An award winning artist, she has developed long-standing relationships with the world’s leading orchestras, conductors and musicians.
Batiashvili is the Artistic Director of Audi Sommerkonzerte, Ingolstadt. For the 2020 festival, she originally designed a programme to celebrate the festival’s 30th anniversary year, as well as Beethoven year 2020 under the motto ‘Lights of Europe’. Due to the global pandemic, an adjusted version with streamed concerts under the motto ‘Together for Music’ featured Lisa and other leading musicians, sending out a strong message of solidarity and adaptability.
Lisa Batiashvili regularly appears on stage with orchestras including the Berliner Philharmoniker, London Symphony Orchestra, Wiener Philharmoniker, New York Philharmonic, Royal Concertgebouw Orchestra, Symphonieorchester des Bayerischen Rundfunks, Staatskapelle Dresden, Orchestra dell’Accademia Nazionale di Santa and Boston Symphony Orchestra, among others.