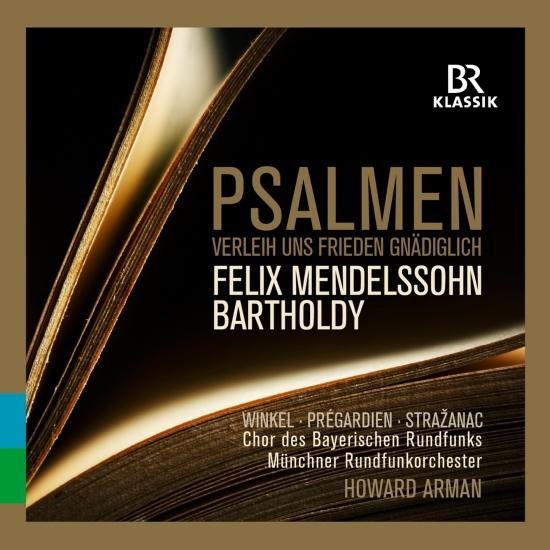 Hardly any other composer of his era was as deeply rooted in the German and European choral traditions as Felix Mendelssohn Bartholdy. Strongly influenced by the art of Johann Sebastian Bach, which he had encountered in the Berlin Singakademie under his teacher Carl Friedrich Zelter, the young composer wrote a series of eight chorale cantatas, including Verleih uns Frieden gnädiglich (Give us Thy blessed peace, 1831) - a short prayer for choir and orchestra set to words by Martin Luther. Mendelssohn's five wide-ranging and large-scale psalm settings became even more famous, and three of them can be heard here. The first piece in the group is the multi-part setting of Psalm 115 Non nobis Domine (Not unto us, O Lord) for soloists, choir and orchestra, op. 31 (1829/30), which was probably begun during the composer’s first stay in England and reveals his fascination for Händel's music.
Mendelssohn himself considered Wie der Hirsch schreit (As pants the hart), a multi-part, cantata-like setting of Psalm 42 for soprano, choir and orchestra, op. 42 (1837/38), to be the best work of this group. Also highly praised by Robert Schumann, it remains one of the composer’s most famous choral works to this day. For the newly-formed Berlin Cathedral Choir, he also wrote a setting of Psalm 98 Singet dem Herren ein neues Lied (Sing to the Lord a new-made song) for soloists, choir and orchestra, op. 91, and in response to requests from London he composed Hear my Prayer, a 'hymn' based on Psalm 55 for soprano, choir and organ, which he later orchestrated.
The piece became one of his most famous sacred works in Victorian England. The new album from BR-KLASSIK contains these five high-profile psalm settings in a recording made on December 17, 2016 in Munich’s Prinzregententheater. The regularly praised Chor des Bayerischen Rundfunks is joined by soloists Johanna Winkel, Julian Prégardien and Krešimir Stražanac, together with the Munich Rundfunkorchester conducted by Howard Arman.
„On BR Klassik this absorbing Mendelssohn album, comprising of a quartet of great orchestral psalm settings and a single chorale cantata, is distinguished by outstanding performances that are both convincing and revealing.“ (Music Web international)
Johanna Winkel, soprano
Julian Prégardien, tenor
Krešimir Stražanac, bass baritone
Chor des Bayerischen Rundfunks
Münchner Rundfunkorchester
Howard Arman, direction