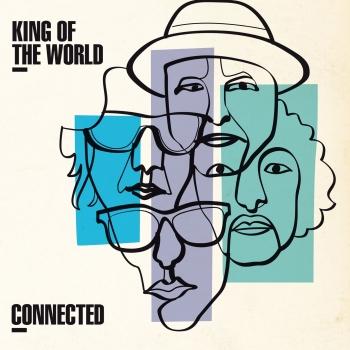 King of the World

King of the World
are back with a new guitarist (Stef Delbaere from Belgium which makes them a true European band) and a new CD “Connected”. A CD full of original material, written with guitarist Stef Delbaere, brings an energetic version of the familiar KOTW sound and leaves no doubt about why KOTW has been on top of the European roots scene for so long.
They built their reputation through the release of three studio – and one live album (Can’t go home 2013, KOTW 2014, Live at Paradiso 2015 and Cincinnati 2016). All four albums scored sheer positive reviews in the European music press. But also a great live reputation has been built through shows at Festivals all over Europe like the North Sea Jazz Festival in Rotterdam. Live TV appearances at late night shows like Pauw & Wittemann, with millions of viewers, contributed to the fore mentioned status. The group has won multiple Dutch Blues Awards over the last years, best drummer, best keyboard player, best bass player (three times), best guitarist and best blues band.
With their modern approach to blues-, rhythm & roots they have developed a style that is often referred to as the “King of the World sound”. Harmony vocals combined with great soloists (Hammond and Guitar). With influences that range from Blues, Rock, Soul to New Orleans. All four members have a history of playing alongside or backing up artist such as, Snowy White (UK), Monster Mike Welch (USA), Matt Schofield (UK), Sue Foley (USA), Deborah, Coleman (USA), David Gogo (CAN), Carl Verheyen (CAN) and many more.
Over the last years the band has been on the road in the Netherland, Belgium, Germany, Austria, Switzerland and the Czech Republic.