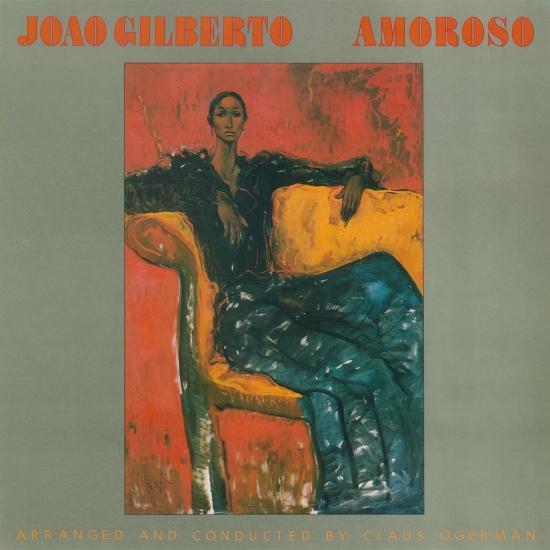 Amoroso is some pretty sweet stuff from Joao Gilberto – featuring a core jazz combo playing along with a larger set of arrangements, in a manner that's similar to some of Jobim's work from the 70s. The album features a nice vocal version of Jobim's "Wave" and "Zingaro", plus the tracks "Estate", "Tin Tin Por Tin Tin", and "Besame Mucho".
Besides João Gilberto's definitive renditions of Brazilian classics, he also put his mark on and made world classics such as "'S Wonderful," "Estate" and "Bésame Mucho" his own. With outstanding arrangements and musical direction by Claus Ogerman, Amoroso is a reference recording for years to come. The album was produced by Tommy Lipuma and Helen Keane, and it featured João on vocals and acoustic guitar.
Amoroso seems to divide some of João's fans. For some, the string arrangements detract from João performances, whereas for others, Claus' orchestral creations only enhance João's peak performances. I have personally been in the latter category and very proud of that. How can I listen to "Wave" without strings attached? The lyrics take on a new meaning with the flute introduction and the soaring violins in the middle of the nearly five-minute arrangement. It is as if João and Claus knew that we would want to listen to this track over and over. "'S Wonderful" was later on recorded by Diana Krall in a very similar Claus Ogerman arrangement. Why change a perfect thing?! Of course, João's phrasing and pronunciation of this Gershwin classic is endearing to say the least. The same goes with "Estate" and "Bésame Mucho." Word classics sung by a world legendary singer!
João is playful in "Tin Tin por Tin Tin," passionate in "Bésame Mucho," heartbroken in "Caminhos Cruzados," towering in "Wave" and always perfect in every song he sings. The album closes with Jobim/Buarque's "Zíngaro," known to many as "Retrato em Branco e Preto."
Joao Gilberto is perhaps forever destined to be lesser known to casual jazz fans than his occasional collaborator Stan Getz (whose GETZ/GILBERTO albums introduced the United States to bossa nova) and his ex-wife Astrud Gilberto (whose shy, delicate voice made her one of the most distinctive and beloved jazz vocalists of the '60s). However, true fans of Brazilian music recognize that Gilberto is second only to Antonio Carlos Jobim as a writer and interpreter of traditional Brazilian music and Brazilian-influenced jazz.
Joao Gilberto, vocals, guitar
Ralph Grierson, keyboards
Clare Fisher, keyboards
Milcho Leviev, synthesizer
Michael Boddicker, synthesizer
Jim Hughart, bass
Grady Tate, bass
Joe Correro, drums
Producers: Tommy LiPuma, Helen Keane.
Strings arranged and conducted by Claus Ogerman.
Recorded November 17-19, 1976 at Rosebud Studio, New York, NY and January 3.4 & 7, 1977 at Capitol Records, Hollywood, CA.
Digitally remastered. 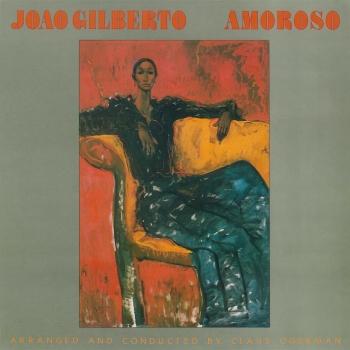 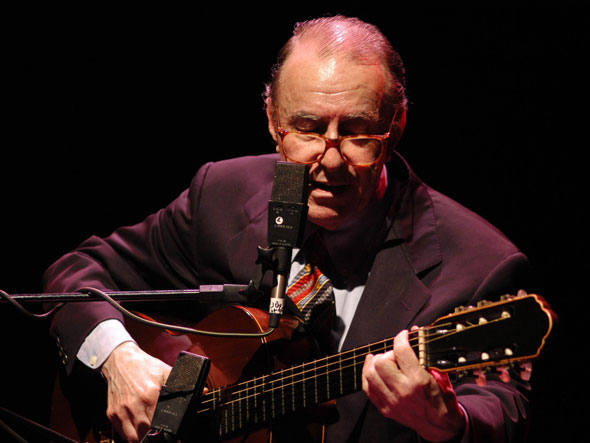 Joao Gilberto
In 1958, João Gilberto created a new musical language through his own voice and guitar. The music, called Bossa Nova, has since spread over the world and, after 45 years, it is still loved in every part of the world and by so many people, especially in Japan.
In September of 2003, João Gilberto finally arrived in Japan for the first time. The concert tickets for 4 days in Tokyo and Yokohama, which were for 20,000 seats in all, were quickly sold out.
On the first day (September 11th), the TOKYO INTERNATIONAL FORUM HALL A was filled with much expectation and tension of 5,000 audiences who were waiting for the historical moment. Then João appeared on the stage 70 minutes later than he was supposed to, said "Kon-ban-wa" (which means "good evening" in Japanese), and started to play his guitar and sing.
The sounds of João's voice and guitar were calm and sensitive. But on the other hand he created the sonic world, which was equal to that of orchestra and percussions all by him only. He put new harmony to the old songs he had been singing for nearly 50 years, reconstructed them and made them sound like new songs that emerged on the spot. The audience faced with his enormous creativity and concentration and responded to his performance with maximum amount of concentration. Everyone was fascinated with João's tender magic and the 2-hour-concert came to an end all too soon.
When those 5,000 audiences went home and went to bed with the fantastic memory of what they had just experienced for the first time in their lives, the Japanese staffs were called out by João and gathered at his hotel with anxiety. But, according to one of the staffs, João said, "The Japanese audience is excellent. I've been looking for the audience like this for decades. My mind and Japanese mind were united. I was feeling how each audience was feeling. Japanese people were great. A-ri-ga-tou (which means "thank you"), Japan.."
That was just a miracle. The audiences who were fascinated by João also fascinated João.
The concert on the September 12th (the 2nd day) was greater than the first day in terms of the program and performance. The audiences were much more relaxed than on the previous day and were embraced by João's music more naturally. Even the applause between songs became the integrated part of his music.
The "incident" happened in the encores of the 3rd and the 4th days. After João finished singing, he bent down his head, closed his eyes and didn't make a move. 15 minutes passed and 20 minutes passed. He still made no move. The continuing applause sounded like the wave and that was all. What happened to João? On the 4th day he who finally opened his eyes explained it:
"Beijo cada mão, cada coração (which means "I kiss each hand, each heart").
A-ri-ga-tou, Japan"
João closed his eyes and counted 5,000 souls one by one and thanked each one. This was the moment that added one more page to his legacy.