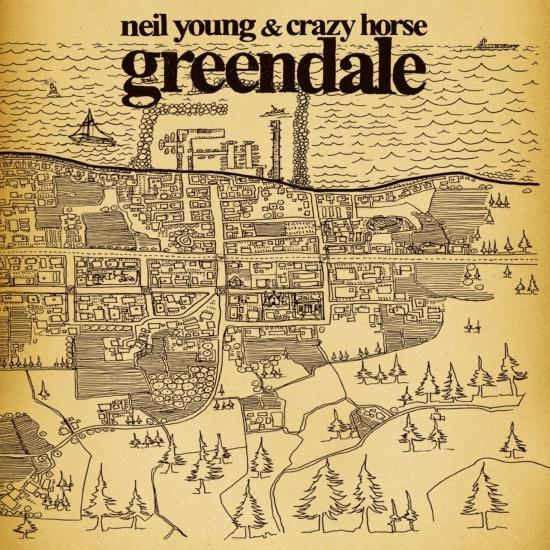 Greendale, a concept album focusing on a small town family's troubles has received much attention. The common theme throughout provides a flow and a unique song unity. The sound and fresh approach to this album has made it a great comeback for Young.
"One of the most ambitious works of his career...a great artist once again at the peak of his game." (Chicago Tribune) "Young has rarely sounded so fresh and inspired...an uncompromising artist with the courage to follow his muse." (Chicago Sun Times) For the first time in his storied career, Neil Young has created a fictional place filled with characters and incidents and written an album about them. The album, and the place, is Greendale and the people are the Green family. The songs are among the most personal he's ever penned, ranging from the dark and biting to the light and humorous. Still surprising and still stirring it up, Young adds a stunning new album to his place in rock history with Greendale.
Neil Young, guitar, organ, harmonica, vocals
Ralph Molina, drums, vocals
Billy Talbot, bass, vocals
The Mountainettes:
Pegi Young, vocals
Nancy Hall, vocals
Twink Brewer, vocals
Sue Hall, vocals
Recorded July 11–September 19, 2002 at Plywood Analog, Woodside, Redwood City, California
Produced by Neil Young, L.A. Johnson
Digitally remastered