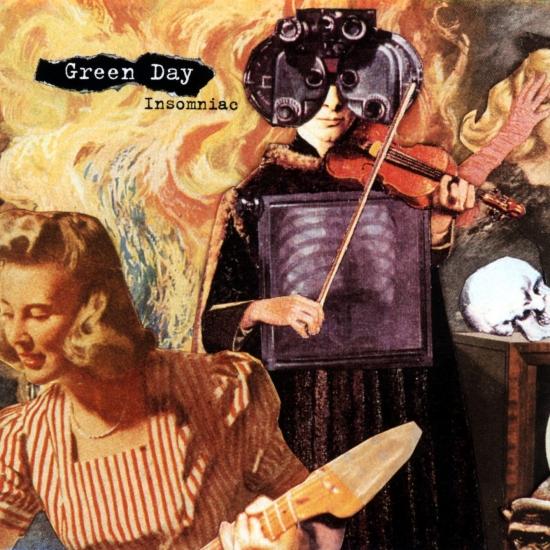 If Nirvana burst the dam that kept punk rock at bay in the '80s, Green Day--with their third album, „Dookie“ —were the first all-consuming flood to hit the charts. Brandishing old school Ramones and Clash riffs, the Berkeley, CA trio made out like bandits, selling nearly ten million albums, scaling mainstream magazine covers and hijacking rock-festival spotlights from established acts. But judging from the lyrical contents of „Insomniac“, bringing punk to the malls hasn't been a very satisfying experience for singer/guitarist Billie Joe Armstrong.
Throughout, he rails at the moribund state of youth culture and his place in it, as bassist Mike Dirnt and drummer Tre Cool speed up this anger to a frenetic pace. The disses fly every which way--at well-to-doers copping poses ("Brat"), at girlfriends who just don't understand ("Stuart And The Ave."), towards the world at-large ("Panic Song"), and, most of all, at himself. As though aware that his band helped make a sacred lifestyle fashionable, Billie Joe demeans his existence in song after song--unable to even sleep in peace with himself. For the disenfranchised listener, these are the ABCs of self-hate rebellion.
Judging from the catchiness of his songs, this predicament isn't likely to end soon. "Geek Stink Breath," a heavy, mid-tempo rumble in the manner of the Sex Pistols' "Sub-Mission"; "Panic Song," with its frenzied "Pinball Wizard"-like build-up, and the fired-up, pop fury of "All Wound Up," all embody the very principals that make the punk lessons of 1977 so attractive today: simplicity, hooks, a lack of pretension, and a disdain for authority. On „Insomniac“, Green Day puts those lessons to use yet again--their platinum nightmares are sure to follow.
„Dookie gave Green Day success, but it was never really clear whether they wanted it in the first place. However, given the incessantly catchy songwriting of Billie Joe, the success made sense. Green Day were traditionalists without realizing it, learning all of their tricks through secondhand records and second-generation California punk bands. They didn't change their sound in the slightest after signing to a major label, which meant that they couldn't revert back to a harsher, earlier sound as a way to shed their audience for Dookie's follow-up, Insomniac. Instead, they kept their blueprint and made it a shade darker. Throughout Insomniac, there are vague references to the band's startling multi-platinum breakthrough, but the album is hardly a stark confessional on the level of Nirvana's In Utero. It's a collection of speedy, catchy songs in the spirit of the Buzzcocks, the Jam, the Clash, and the Undertones, but played with more minor chords and less melody and recorded with a bigger, hard rock-oriented production. While nothing on the album is as immediate as "Basket Case" or "Longview," the band has gained a powerful sonic punch, which goes straight for the gut but sacrifices the raw edge they so desperately want to keep and makes the record slightly tame. Billie Joe hasn't lost much of his talent for simple, tuneful hooks, but after a series of songs that all sound pretty much the same, it becomes clear that he needs to push himself a little bit more if Green Day ever want to be something more than a good punk-pop band. As it is, they remain a good punk-pop band, and Insomniac is a good punk-pop record, but nothing more.“ (Stephen Thomas Erlewine, AMG)
Billie Joe Armstrong, vocals, guitar
Mike Dirnt, bass, backing vocals
Tré Cool, drums
Recorded September 1994 - May 1995 at Hyde Street Studios, San Francisco, California
Engineered by Kevin Army, Bernd Burgdorf
Produced by Rob Cavallo, Green Day
Digitally remastered