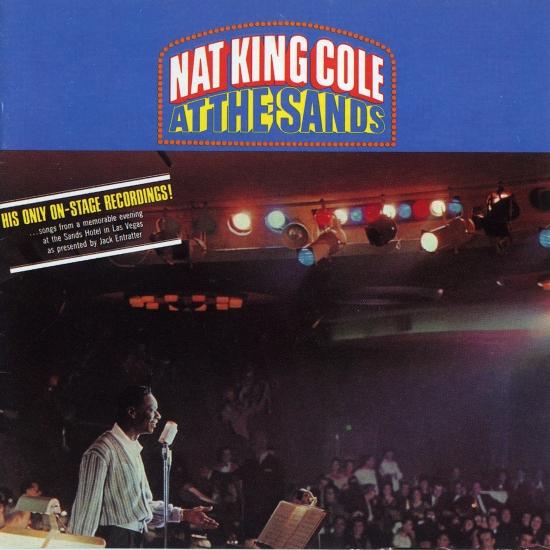 Info zu At The Sands Live

This rare example of a Nat 'King' Cole live recording captures one of the 20th century's greatest singers in fine voice in 1960 at the Sands, the Las Vegas headquarters of the Rat Pack. The band swings expertly through its sophisticated charts courtesy of legendary arrangers like Nelson Riddle and Dave Cavanaugh, and Cole demonstrates his command of a wide range of styles, from ballads like 'I Wish You Love' and 'Funny (Not Much),' to show tunes like 'Thou Swell' and 'Surrey With the Fringe on Top.' A few bonus tracks are also featured, including a late-'50s studio recording of Duke Ellington's 'In a Mellow Tone,' and Cole's sniffy take on the then-still new rock & roll craze, 'Mr. Cole Won't Rock & Roll.'
„A year after Nat King Cole's death, Capitol Records released this 'live' album, recorded at the Sands Hotel in Las Vegas on January 14, 1960. There is a historical interest, in that this is the only Cole concert recording, and it's an enjoyable performance, with more up-tempo numbers than ballads and a piano solo on 'Where or When' that demonstrates Cole had not lost his jazz chops. But Cole on-stage is not a revelatory experience, at least on this night, and like most Vegas performances, this one is a little overdone. (An arrangement of Cole Porter's 'Miss Otis Regrets' is especially unfortunate.)“ (William Ruhlmann, AMG)
'...The only known live recording of Nat King Cole, from the Rat Pack's hang out of choice in 1960...' (Q-Magazine)
Nat 'King' Cole, vocals, piano
John Collins, guitar
Charlie Harris, bass
Lee Young, drums
Digitally remastered